Today, on Monday 7 September 2020, we are gathered in front of the church in Casamacciuli to say goodbye to Pierre. Cancer had begun to tighten its grip six years earlier. Six years of fighting, tenacious and clear-eyed, with mountains and climbing as the main weapon of war. Don’t let up for a second, and above all don’t let go of the holds! Right until the end, Pierre held them, caressed them… 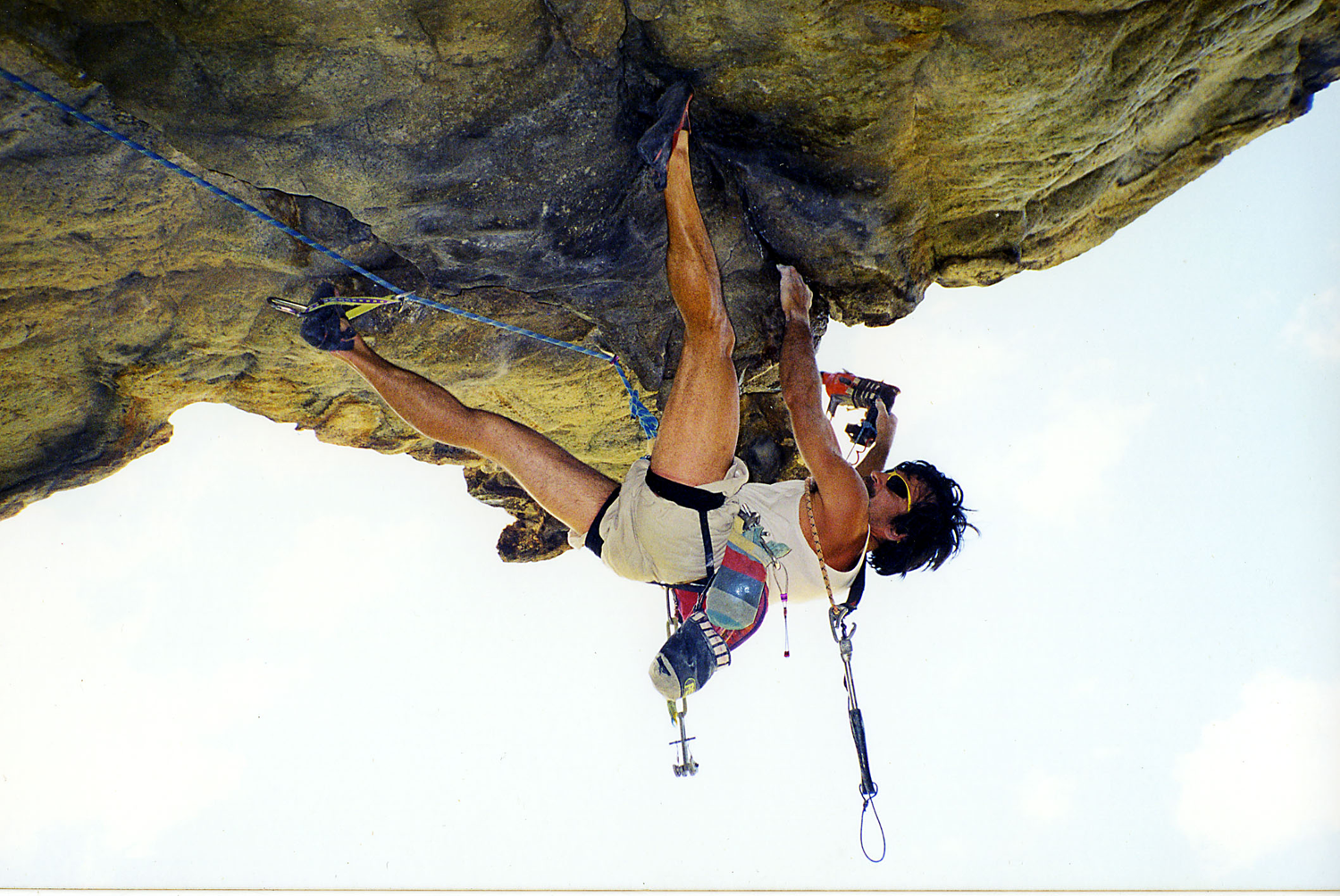 Pierre Pietri was not a precocious climber because he had to wait until his university years to begin climbing. It’s not that he didn’t want to before this, but a parental prohibition order was imposed on him regarding this sport, due to its reputation for shortening the lives of its devotees. That was still in the era of the last great alpine sagas, typically reported in Paris Match with much hyperbole and very dramatic photos.

So Pierre missed out on an early climbing education, but he quickly made up for lost time because in the very first year of climbing, he made the first ascent of a route on the Lombarducciu… by mistake… and by following an erroneous description in a guidebook. His parents were perhaps right to be concerned!

But when the ball starts rolling… there’s no way it will stop! In 1979 Pierre was 23. With his friend Sylvain Cavallini, he accompanied walking groups every other week. As soon as Sunday evening came around, they took up residence in their lodgings “under the stars” at the foot of the north face of the Paglia Orba because the Ciottulu di i Mori hut did not exist at the time.

Pierre tells the story*: “That year, we ransacked the Paglia Orba, making the first ascent of a new route each day; as many as 4 per week! On the rest days, we attempted speed records in the Finch, on the east face. When Sylvain came back with a time of 15 minutes, I decided to stop this dangerous game! However, this was not a “death-cheater” approach to climbing, as some would describe it, because no-one was more hedonistic and happier to be alive than us. This competition on the Finch, on excellent rock and at grades well below our max, was the perfect example of the way we interacted. With Sylvain, it was great! It was about who could find the nicest and most… adventurous pitch, I would say. There was constant emulation between us. In addition, we had two completely different styles and personalities, Sylvain was a boulderer who had left the ground behind him, and I had a lot of endurance. It was perfect; we were perfectly complementary.

Thus, still in the summer of 1979, I made the first ascent of Le Facteur d’orgues, on the north face of the Paglia. This initial solo first ascent was very memorable for me. I gave a squeeze chimney section a grade of 6a, but at today’s grades I think it would be 6c. And a little further up, I became stuck and had to sort something out with some bits of cord to swing across to a parallel crack on the left. In fact, I was permanently escaping upwards…Moreover, this route has hardly ever been repeated.

Talking gear, it’s not complicated, in the first few years we only had a few pitons, nuts and hexes that we had drilled holes in to reduce their weight, making them look like Swiss cheeses! Cams came on the scene a little later, at the beginning of the 1980s, but little by little because we didn’t have any money to speak of.”

For Pierre, more than a passion, the mountains were a vocation and he very logically began training as a guide in 1985. With Pierrot Griscelli, his programme consisted of making first ascents of multi-pitch routes and crag climbs everywhere on the island.

A specific event was to open up new horizons to them: “In ’88 the penny dropped with Conte de pluie et de lune, Hagenmuller’s route on the Teghie (Bavella). He had dared to make a first ascent up the middle of the slab! When we repeated it, we had an enormous shock: we didn’t understand how he had managed to drill; because to start drilling a hole you need something to push back against, and here there was nothing but slab! Indeed, he took some falls while drilling, and not just little ones either. This new approach to a first ascent made a great impression on us and in turn, we began to make first ascents on bolts.”

Since then, and until recently, Pierre led or accompanied the progress of high-level climbing in Corsica. He visited all the rock faces on the island, making several major first ascents. On crags, he signed his name to the first 7a and 7b lines on the island (1985) and still just the other day he was “at his max” in the roofs graded 8b at Saint Florent, which left him little time for the rest, all the rest, of what he called his spontaneous adventures: the ascent of an unclimbed spur buried deep in the Popolasca massif, the dangerous ski descent of the west face of the Capu Larghja, or bolting of an 80m route in the Millennium cave in Sardinia, spending 3 days hanging below the stalactites and peeing in a bottle. And all the other unknown adventures that created the legend of “the treasure chest”, a small cupboard containing school notebooks where Pierre carefully recorded the route descriptions of all his climbs. “They are not secret, he said, but I don’t have time to do anything else with them”.

The pages of this book will show you a very small part of this immense legacy. Of course, all the classics are described, but also a few “new” routes, some of which were ascended for the first time more than 40 years ago and are known only to a few friends, and then others which have been forgotten since the 1990s when the Petit Livre Bleu** went out of print. This is just the first step, a promise of great adventures to come on the trail of the “Pietri routes”.

Those who have died are only truly gone when they have been forgotten by the living. On this day in September 2020, we buried Pierre’s body at the foot of the mountains… his own mountain. But his soul, on the other hand, lives on in each of his routes.

* descriptions taken from an interview with the Italian magazine Alp or collected “at source”.

** The PLB (Petit Livre Bleu), its real name being “Corse escalade choisies – Volume 1” is the only complete guidebook for the Paglia Orba. It is a reliable guide thanks to the precise sketches and detailed route descriptions, as long as you know how to interpret the grades. The general rule is: don’t underestimate V, be wary of V+ and expect anything and everything if you meet a VIa, the maximum grade used (with the exception of one single VIb amongst all 41 routes!). We have of course re-graded the routes presented.

Descriptions for routes ascended after the appearance of the PLB have never been published and only a few of Pierre’s climbing partners have heard of them, by chance in a conversation at the foot of a route or, less frequently, via a climbing forum.