After a reunion held on March 12th, 2004, which brought together a large number of route establishers on the island, and also included the development of proposals by the Association Corsica Roc on March 23rd, 2005, the following charter was passed by the Regional Committee on April 5th, 2005 and subsequently transmitted to all of the FFME (Federation Francaise de la Montagne et de l’Escalade) clubs to review. It has now become the official position and charter of the Comité Régional Corse of the FFME. This charter was not intended at all to undermine the existing one but to establish a policy for the coming future.

• Integrate ones actions in collaboration with local plans to bolt routes.

• Communicate with all fellow users of the zone.

• Take impeccable care of the environment.

• Do not bolt systematically and in an equidistant pattern that does not take into account the route’s interest and logical progression.

• Do not chip/modify the rock except in the case of purging for safety.

• Respect the ambiance and the surrounding routes that already exist; do not intersect lines or open a bolted route that will come too close to a classic route.

• Respect the style of the crag: Sport climbing, Traditional climbing or Bouldering.

• The re-bolting of old routes that are regularly climbed must be done so identically (replacement of old belays) and with maximum consideration and respect to the original level of commitment (keeping the same number of bolts on each pitch is mandatory).
This consideration and practice is to be moderated in the case of a small number of routes in the mid-level grade within the massif where it is impossible to establish other lines in the same grade. Moreover, and in a general sense, it is essential to respect the style in which the route was originally established.

• Protect and respect the fragile and natural state of these pristine, wild traditional climbing venues. This point was debated and it was therefore necessary to write a clear list of the massifs that should be included in traditional climbing venues (virgin of any new bolts) : Cintu, Paglia Orba, Capu Tafunatu, Capu d’Ortu, Punta Polischellu, Petra Sulana, Sgiò Agostinu, Candellonu, Face Nord de la Tafunata di Paliri.

• In respect of the hardwear that is to be installed, there shall be a systematic use of stainless steel in the case of any future actions by virtue of environmental concerns. 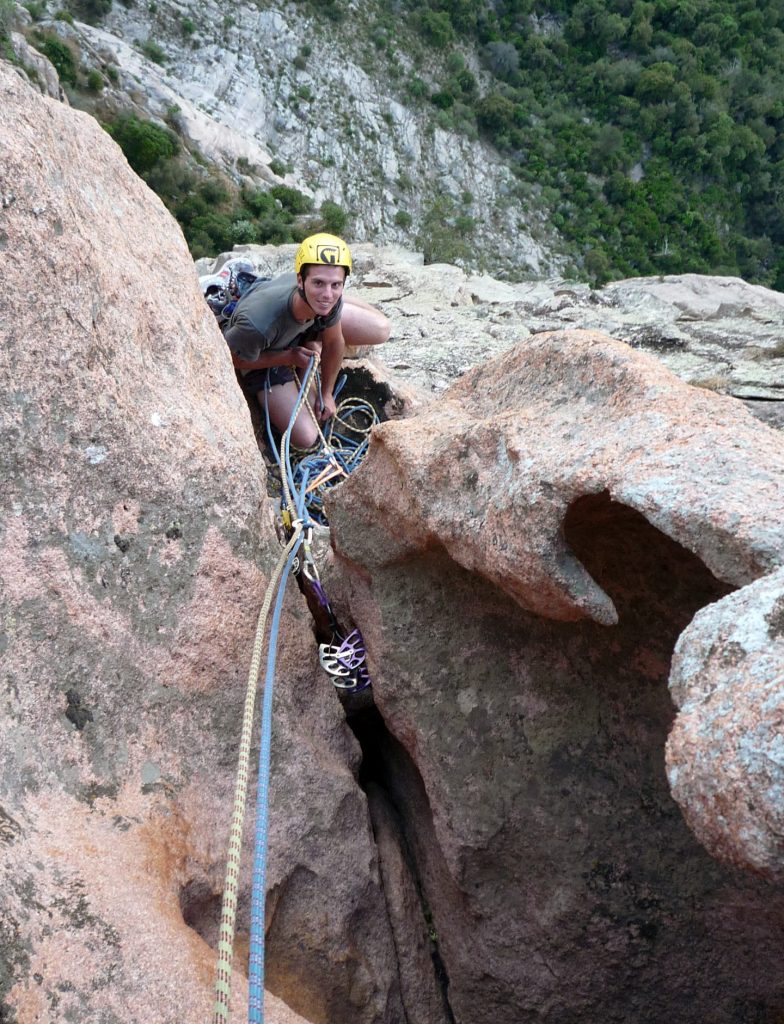 The opinion of the authors of the climbing guidebook Grandes voies de Corse.

A part of the Bolters’ Charter is very close to our heart: “Respect the no-bolt, traditional climbing areas”. This arrangement applies to a list of around ten summits or faces where the use of bolts is not allowed.
What is the purpose of this radical measure and why not, “Bolts are only allowed where no other protection is possible”?
First of all, it is because this last phrase is truly meaningless. It is completely dependent upon the subjectivity and experience of the opener as well as their level of commitment.
This line of thinking only applies to a very small proportion of trad climbing on the island, often remote and suitable for natural protection. It would leave us with the liberty to use bolts wherever we see fit on 98% of the rock on the island.
Lastly and most importantly, without bolts the game is no longer the same. Failure is now again possible and the approach to opening is completely different. If I don’t dare to try here, I’ll try over there and if I still can’t make progress, I’ll get the hell out of the way for someone else who is stronger, more inspired or maybe just has more guts than I do. Therefore, it is the mountain that dictates the necessary commitment and no longer the ego of the first ascencionist.
While the “no bolt” philosophy is, in our opinion, an elitist perception then the lack of respect for those rare and wild summits is an egotistical blunder. There is a time and place for everything.
We hope that you understand this way of thinking and that you (potential first ascensionists) are there to follow and appreciate this philosophy.